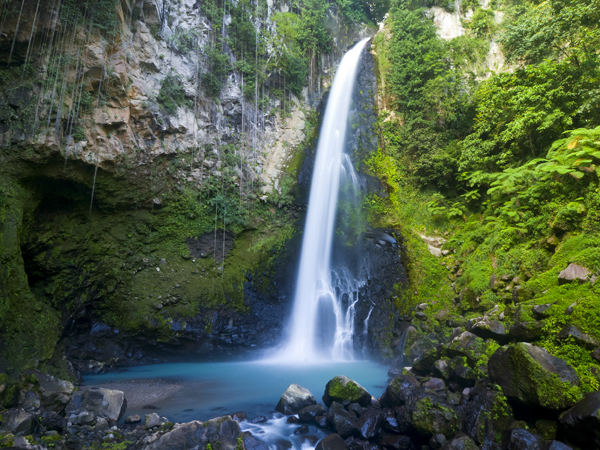 The Commonwealth of Dominica, also known as the nature island of the Caribbean, is the most northerly and largest of the Windward Islands.  It is heavily forested and is renowned for its lakes, waterfalls and over 365 rivers.

The Dominican economy has largely been dependent on agriculture, primarily bananas; but government is also seeking to promote the country as an “ecotourism” destination.

The agricultural sector is a significant contributor to the economy of Dominica, contributing approximately 17%, or US $93.4 million to the country’s GDP. It is also a major source of jobs in Dominica, employing an estimated 7,000 out of the estimated 32,000 persons actively seeking employment.  This represents 21% of the active work force.

An estimated 34.7% of land is used for agriculture in Dominica, with permanent crops making up 24% of that number.  There is also an additional 8% of arable land. While Dominica’s rocky and mountainous terrain makes it unsuitable for plantation production, the climate, fertility, and topography are favorable for tree crops.

Dominica experienced a “banana boom” in the 1980s when it was assured access into the UK market. At that time, banana exports accounted for as much as 70% of export earnings. With the decline in the European market as an export destination, more emphasis has been placed on diversification into other crops such as citrus fruits, vegetables, coffee, cocoa, coconuts, herbal oils, extracts, patchouli, aloe vera, cut flowers, mangoes, guavas, and papayas.

Livestock is a minor but significant contributor to the sector.  Laying hens, poultry, cattle, goats, sheep, and pork are grown primarily for local consumption.

There is a relatively large fishing industry in Dominica, but it is small-scale and almost exclusively serves the domestic market. A successful experiment in fresh-water prawn farming, supported by Taiwanese aid, has produced substantial amounts of prawns for the domestic and local markets. Japan has provided support for a fish landing and processing plant in Roseau.

This unit was established within the Ministry of Agriculture in 2008 for the coordination and execution of the investment plan for the non-banana agriculture sector.  Its aim is to attract agro-entrepreneurs to invest in agriculture in order to increase income and employment. Areas covered under the credit scheme are:

This platform is used by the Government of Dominica to attract investment in manufacturing activities, with the potential to generate employment and export earning potential.

The Invest Dominica site highlights the fact that Dominica has an abundance of natural resources – water, forests, fruits, herbs, flora and fauna, which provide potential investors with several opportunities. The products derived from these resources include a number of high end niche products like bulk and bottled water and mining.

In the area of agro-processing, for example, soaps derived from coconut oil are made as well as a variety of rums and rum punches, fruit juices, essential oils, ice cream products, carbonated and non-carbonated beverages, furniture and wood products.

Businesses involved in Manufacturing can enjoy a 15-year tax holiday benefit and other incentives under the Fiscal Incentives Act. The Government of Dominica offers a very generous fiscal incentive package for investment in this area.

Banana production has historically employed over one-third of the labour force. In addition, CARDI has done extensive research and development in Dominica with root crops like yam, dasheen, sweet potatoes and tannia, as well as tubers, fruit crops and hot peppers.  CARDI has also partnered with the Nature Island Pineapple Producers Association (NIPPA) for the development and promotion of pineapples on the island.

In the 2014-2015 Budgetary Proposals the Prime Minister of Dominica indicated that government had constructed two pack houses, one at Portsmouth and the other in Roseau, to meet the required handling, labelling and packaging standards that are required to make products export ready.

A regime of standards and the accompanying tests has also been introduced to ensure compliance through the National Centre for Testing Excellence (NCTE).

There have also been efforts to increase cocoa production as a result of demands for cocoa for export.  According to the 2014-2015 Bugetary Proposals 200 farmers have been given 10,000 cocoa plants by the Division of Agriculture.  There is a target of having 300 new acres of the crop; 50 acres have been established, while 100 acres have been rehabilitated.