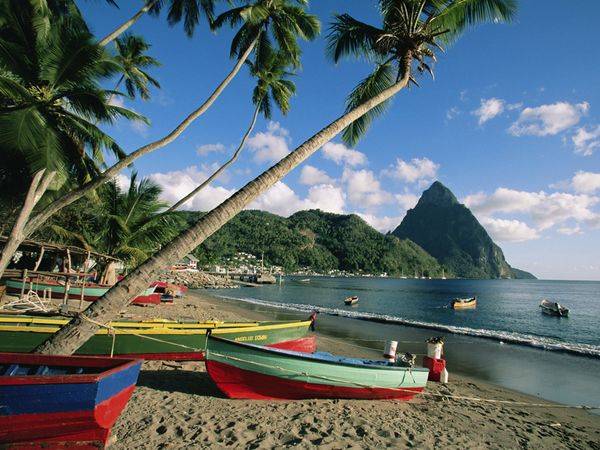 St. Lucia is one of the Windward Islands within the Eastern Caribbean. Currently, agriculture contributes 3% of Saint Lucia’s GDP and there are many small and medium sized agricultural enterprises. However, the country’s economy also depends significantly on its major natural resources – beaches, minerals and mineral springs, in addition to its services.

Trading partners for St. Lucia are the United Kingdom, US, Brazil, Peru, France, Grenada, Barbados, Antigua and Barbuda, Dominica, and Trinidad and Tobago.

Bananas have been the major crop for many decades although production levels have declined considerably.

As a result, government, with the assistance of the Taiwanese government, has taken steps to combat the Black Sigatoka disease, also known as the banana leaf spot disease, and has been paying close attention to existing and emerging challenges and threats such as Panama Disease.

With regard to the coconut industry, there is an effort to further develop production  and to find increased export opportunities.

In the area of livestock, government is trying to increase production, primarily for food security reasons and to reduce the import food bill.

Agriculture remains a significant contributor to economic development. Investments in agriculture and fisheries have risen since 2009, showing positive signs for the re-emergence of the sector.

With regards to the banana industry, St. Lucia recorded a record 5,000 tonnes exported in 2014. This was as a result of the continued efforts to fight the Black Sigatoka Disease and the collaborative work with farmers across the island.

Government is also encouraging investments in the cocoa and the chocolate production sectors.  The island’s cocoa sector is also being revitalised mainly through a partnership between the European Union Global Climate Change Alliance programme and the Caribbean Community Climate Change Centre.

The Rabot Estate is a cocoa plantation that was established in 1745 near Soufriere in the South West of St. Lucia.  Through its Island Grower Cocoa Programme, Rabot Estate provides advice and technical assistance, seedlings supply and market access to its partners.

Hotel Chocolat is housed on Rabot Estate and specialises in the production of luxury chocolate. Hotel guests stay in cottages and are treated to daily breakfast while visitors to the estate can enjoy the chocolate heritage tour.

Hotel Chocolat is a good example of the partnership between the manufacturing, agriculture and tourism sectors as the chocolate-making process has become a tourist attraction.  The hotel also produces many chocolate by-products, particularly for the health and wellness sector.